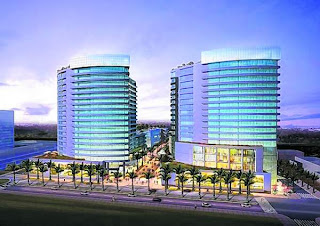 SARASOTA – Backers of the downtown Proscenium project highlighted its eye-popping numbers and their lawyers said the $1 billion mix of shops, office space and condominiums would be an “economic engine” as city commissioners prepared to cast a deciding vote Monday night

The possibility of creating 5,000 construction jobs and 1,600 other jobs weighed in the developer’s favor as city commissioners voted unanimously to approve it.

Opponents of the six-acre development — which would include a Waldorf-Astoria hotel and a performing arts center — warned that it would generate enough traffic to choke already busy U.S. 41.

The city’s attorney has warned that, if built, it would create the need for $28 million in road improvements that are not being covered by the developer.

But commissioners were swayed by the other set of numbers: Economic impacts like $3 million annually in property tax revenue and thousands of jobs.

“This project is what Sarasota hopes to be,” said Commissioner Ken Shelin.
Commissioner Kelly Kirschner, who had voted against it in the past, called it a “jolt in the arm” for the local economy and changed his vote, noting that he still had major concerns about traffic.
Commissioner Fredd Atkins called it “another fantastic opportunity to do something.”

The plans include 300,000 square feet of office space and 211 condominiums. Lion’s Gate President Gary Moyer said he hopes to be building by next spring.

Herb Waltzer, who lives near the project designed for property along U.S. 41, said it would give a much-needed economic boost to the Rosemary District.
“It would bring jobs, commerce and economic growth for the city,” Waltzer said. “This economic growth would give Sarasota something more than beaches and great weather.”

Dan Lobeck, a lawyer representing a resident opposed to the project, focused on the 17,000 daily car trips that would be added to U.S. 41.
Lobeck pressed the developer’s lawyer and architect, saying they were not answering his questions. On two occasions, the mayor told Lobeck to step down from the dais after he continued to ask questions beyond the time allowed.

In a recent memo to city commissioners, City Attorney Bob Fournier concluded that construction of the Proscenium would trigger the need for $28 million in road improvements that are required by the state.
That is in addition to the $16 million that Lion’s Gate Development has pledged to bring nearby roadways up to state standards.
Lobeck said the development would be the most traffic-intense project ever built in Sarasota, and residents would have to foot the bill.
Dan Bailey, a lawyer representing Lion’s Gate Development, countered that the city would be required to make most of the six intersection improvements on U.S. 41 or Fruitville Road whether or not commissioners approved the Proscenium.