As recently as the mid 1920’s, Venice was little more than deserted coastline brushed by woods and farm land. A land boom quickly put an end to that as thousands of people arrived, looking for their place in the Florida sun.

Wisely, the emerging new community chose John Nolan, an internationally famous city planner, to design a city. They also engaged Prentiss French, a noted landscape architect, to beautify it. People from around the country jumped at the chance to be part of it.

The results are impressive—even by today’s standards—and apprentice urban planners routinely study the intricate design. Venice is a meticulously planned city, with sweeping tree-lined boulevards leading to beaches, parks, greenways, the Intracoastal Waterway and residential areas. The Island offers a unique opportunity to live on—or very near—the Gulf of Mexico, with easy access to shopping, the Arts Center, hospital, schools, the library and restaurants. Casperson Beach, at the southern tip of the island, is renowned as the ‘Shark Tooth Capital of the World’ for its abundant cache of fossilized shark teeth strewn along its lengthy shoreline. 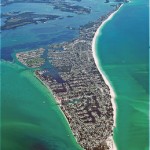 Sarasota Summer Golf Memberships are Back !