All Sarasota Golf Course Communities would benefit from The Solheim Cup

The Concession Golf Club remains in the running to host the 2017 Solheim Cup, the women’s professional golf version of the Ryder Cup. Certainly real estate at The Concession would directly benefit from having 120,000 or so well healed spectators touring their beautiful grounds and community under Florida sunshine over seven days in September. But, in fact, all of Sarasota’s premier golf communities would get a boost from the exposure that this event would provide.

We are dealing with thousand’s of people who would not normally come to Sarasota. All they need to do is have a positive experience both at the event and then the beach, or downtown, at The Ringling or Selby Gardens and suddenly Sarasota becomes a serious choice for a real estate purchase.

When TPC Prestancia held the PGA Senior Tour in the 1980’s and 1990’s, the club sold tens of thousands of tickets each year. The club reported a good number of membership enquiries after each tournament. And membership sales means real estate sales. And let’s not forget the world wide television exposure. Anyone viewing the tournament on TV from a chilly northern climate would certainly make a mental note to check out Sarasota some day. You hear anecdotal stories of people visiting a place, liking it, and buying a home. So come on Solheim Cup. 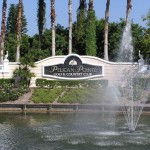